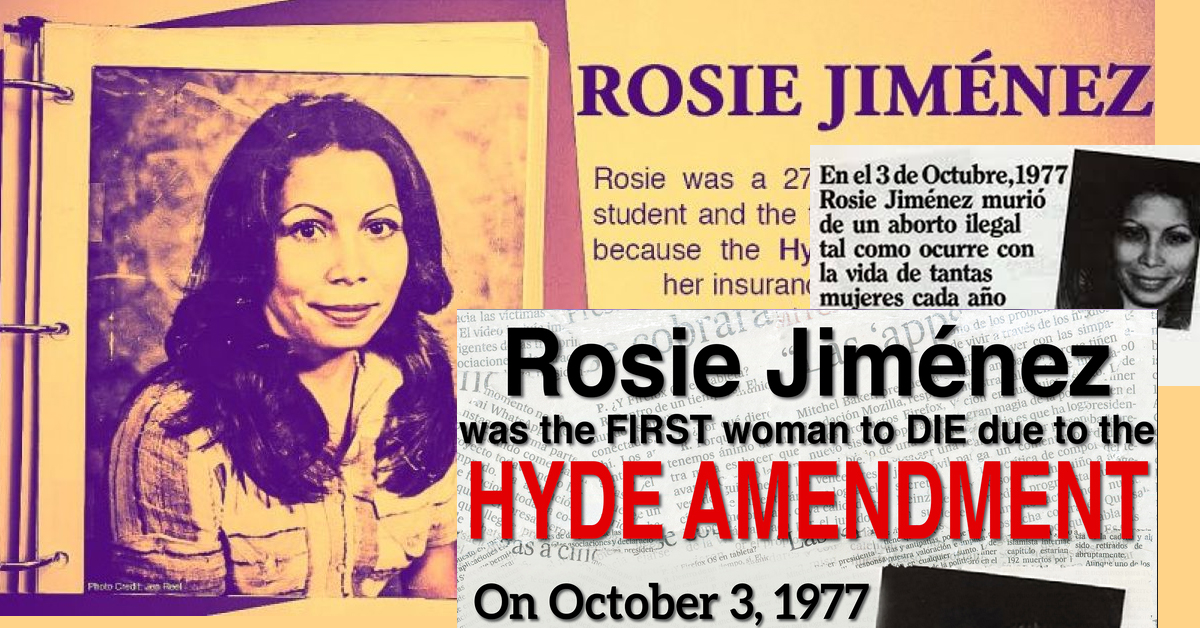 In the late 1970s, Rosie Jiménez was 27-years-old, a Chicana who was the first in her family to go to college. She was also the mother of a four-year-old daughter, and she did not want to have any more children. Because she was poor and lived on less than $100 per month, she was not able to acquire an abortion legally in 1977 as she had with her previous two abortions. This is because of the Hyde Amendment, which had just gone into effect a few weeks ago. The Hyde Amendment prohibits federal funds, including Medicaid funds, from being spent on abortion. As of August 2021, it is still in place.

Rosie was forced to get an illegal abortion by an untrained midwife who used dirty tools, and she became very ill with an infection as a result. Being afraid to tell the doctors the truth about what happened because she had broken the law, the doctors were not able to treat her quickly and appropriately, and so Rosie Jiménez became the first woman to die as a direct result of the Hyde amendment being passed.

The way the media portrayed Jiménez' death was racist, in that they used her Chicana ethnicity and Mexican heritage to lie about her motive for trying to hide her abortion from her doctors. The media claimed that because of her Mexican upbringing, Rosie had been too embarrassed and ashamed of her abortion to mention it to her doctors. The media implied that she was therefore to blame for her own death. However, this was a lie, because they omitted the fact that she had had no problem approaching these same doctors for her previous two abortions. One of the doctors who participated in the smear campaign against her had performed a previous abortion, too.

This stereotyping of Rosie was done by both liberal and conservative media. They covered up the fact that she was forced by poverty to obtain the abortion illegally, because that would have exposed how wrong the Hyde Amendment was, which many supposedly liberal politicians supported. So instead, they relied on racial stereotypes against Mexican women and culture.

When the police were forced to look at evidence that the unqualified midwife had performed the abortion, she was prosecuted and sentenced to a $120 fine and three days in jail. In contrast, there is the case of a midwife in San Luis Obisbo, an upper-class white neighborhood in California. A baby she delivered in 1978 died the next week, for reasons that were thought to be unconnected to the midwife’s care. Still, that midwife was charged with second-degree murder (though the case was later thrown out because the parents defended their choice to use a midwife). It was easier for the establishment to stir up public outrage over a white baby's death. Of course, the real motive was not a genuine care for the baby, but that the midwife in the wealthier neighborhood posed a threat of competition to the medical establishment.

In the years since Jiménez' death, she has become a symbol within the feminist movement for the fight for reproductive justice and to end reproductive racism. Jiménez' daughter, Monique, only learned as an adult about the real reason for her mother’s death. She was inspired by her mother’s story to become a pro-choice activist. She helped to pass a Texas measure called “Rosie’s Resolution” in 2018 that called for repeal of insurance coverage bans on abortion.

There are other measures that activists have taken to try to chip away at and overturn the Hyde Amendment. One such effort called the Lilith Fund, to provide money to poor women who need an abortion. More recently, in 2017, the EACH Woman Act was introduced to end insurance coverage bans that target abortion care. The name has now been changed to simply The EACH Act, and earlier this year it was introduced as a bill in Congress.

The fact that the Hyde Amendment has been allowed to remain law for so long is a reminder that in spite of advances for middle-class or wealthy women, the capitalist system is built in such a way to hit poor women the hardest, and that poor women of color will have it the worst under these laws. Radical Women has fought to overturn the Hyde Amendment from the beginning, and has put struggles like Jiménez' at the forefront of its demands. Without centering the most oppressed women with demands that address poverty as part of a larger movement to overturn capitalism, it is only a matter of time before all women's rights are eroded. That's why we must continue to build a multi-racial solidarity movement in defense of reproductive freedom until the Hyde Amendment is overturned.

Sarah Scott is active in Radical Women and records her maritime adventures on her video blog “Sarah Scott - Adventures of a Black Woman Sailor.”


For more information, to volunteer, add an event to the calendar, or arrange press interviews, contact the National Organizing Center: radicalwomenus@gmail.com • 206-985-4621
Visit the Radical Women website at www.RadicalWomen.org